My Review of “Comanche Captive” by D. Laszlo Conhaim

By lindasbookobsession in Uncategorized on October 5, 2017
No comments 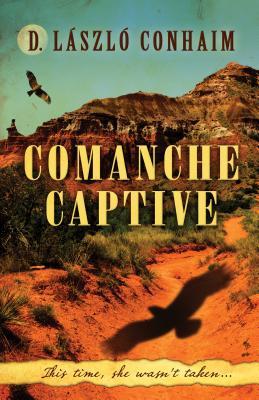 byD. László Conhaim(Goodreads Author)
it was amazing 5.0  · Rating details · 1 Rating  · 0 Reviews
Scott Renald is an Indian agent searching for white captives. Laura Little is a former captive seeking her Comanche-born son. They meet unexpectedly on the high plains. Touched by her story, Renald leads Laura’s search while hostile tribesmen pursue them. Word of their predicament reaches Fort Sill, and agents are dispatched to grab her and recall him. Meanwhile, the army prepares for war with the Comanche. Circumstances propel all into a heart-wrenching and bloody conflict of competing loyalties and surprising discoveries against the scorched backdrop of the Staked Plain.

How does a captive become a willing tribal member? Can rescue and return be a crueler form of abduction? Comanche Captive depicts what happens after the taken has been found—in Laura’s case, forced separation from her child, unwanted psychiatric care, and finally the deadly consequences of her quest for her lost son.

An adventure novel of depth and contemporary resonance, equal parts poignant drama and playful homage, Comanche Captive offers a cast of vivid characters faced with the challenges of a divided and yet increasingly blended world.

(less)
MY REVIEW OF “COMANCHE CAPTIVE” by D. Laszlo Conhaim
“Comanche Captive” by D. Laszlo Conhaim  reminds me of  actually watching a Western movie with a big tub of popcorn, and soda or in my case coffee. The genres of this story are Historical Fiction, Fiction, Adventure with a dash of wit and satire thrown in. To quote the blurb in the book. “Combining historical fiction with western adventure, “COMANCHE CAPTIVE” chronicles the tale of Laura Little, a former captive who endures forced separation from her child, unwanted psychiatric care and finally the deadly consequences of her quest for her lost son”
D. Laszlo Conahim’s descriptions of the western terrain, territories  landscape ,plains,and the Comanche tribe (and others) were extremely vivid and engaging. The author was motivated in writing this story after seeing Randolph Scott 1960 film “Comanche Nation ” and wrote this story with a twist. The timeline of the story is could be anywhere from 1836-1875.
The author describes his characters as complex and complicated and adept to the turbulent times. Scott Renald searches for white captives that have been taken. Laura Little is a former captive of the Comanche, and has been separated from her young son.When Laura is “rescued” she is sent to a facility to acclimate to society again. In those times Laura was considered  a problem, because she wore her hair down, and not up, or wore pants and not a dress.  All Laura wants is her half Comanche son with his beautiful blue eyes. There are some colorful and quirky characters. There is a touch of wit and satire in this story as well.
I absolutely loved Laura Little. In those times, realizing that she was not going to be let out of the mental institution, she hog-tied the doctor, jumped out the window, and rode a horse bare-backed, determined to get back to her son , no matter the cost. She meets Scott Renaldo, and convinces him to help her. The two start out on a perilous adventure that is quite dangerous and deadly. Laura Little may be blond and petit, but she is one “kick ass Mama”.
I appreciate the historical research that went into the story. The author does blend the fiction and history like a marriage. I also appreciate that the attention to many women captives who were held captive and had children with the Comanche. These children were lighter in color, and even had blue eyes. Many of these women had no choice. If they were rescued, they often would wind up in a mental institution.
I would recommend this unusually historical fiction novel  with western adventures for those readers that would enjoy the time period.  I would like to thank Get Red PR, Five Star Publishing for an ARC of this book for my honest review. This book will be released November  15, 2017. Happy Reading!