Most days, I’m a journalist who writes about healthcare. On a lark, I began writing fiction several years ago, and Voila! I became a novelist, as well. (It wasn’t quite that simple, but that’s another story.) Along this journey, my fiction has appeared at The Bookends Review, Gravel Literary, Flash Fiction

Magazine, Hippocampus Magazine and other literary journals. I’m the mother of two grown daughters, who both live too far away for my taste, and last year acquired a British son-in-law. Currently, I live at the Jersey shore with my husband and a cranky Yorkie named Diesel. Virtually speaking, you can connect with me on Twitter, Facebook and Instagram. 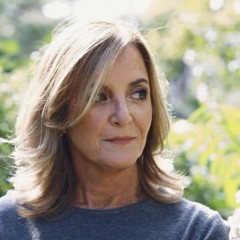 Waves of doubt washed over me.

It’s one thing to write a book inspired by a hurricane that happened five years ago. That window of time permits a certain amount of healing and perspective. It’s quite another to introduce that newly published novel during the calm between two killer storms.

That’s the quandary I found myself in recently while preparing to introduce my second novel, AT WAVE’S END, at BookTowne, my Jersey shore bookstore. On the one hand, I had earned the right to celebrate this career milestone, and my far-flung family had traveled far to be at my side.

On the other, on that August night, Texas and Lousiana continued to reel from Hurricane Harvey’s impact, while the Caribbean, Florida and regions north girded for the future wrath of Hurricane Irma.

I decided I could not proceed without first acknowledging the pain of the millions in harm’s way. Here are the words I shared at the outset of that evening:

As far as the book I’m talking about tonight, most of you know it’s a story about a hurricane. I’m going to read an excerpt from it in a minute, but before I do that, I want to admit that it’s a bit surreal for me to stand here and talk about my new book in the wake of Hurricane Harvey.

I want to take a moment to acknowledge the devastation and overwhelming loss happening in Texas and Louisiana. We’ve all seen the images, and we’ve cried over them, because as a community, we understand. Quite literally, we’ve been in the same boat.

These are horrors many of us experienced with Hurricane Sandy five years ago—if not first-hand, than as a member of a community struck down by the storm. Many in our area are still rebuilding.

Already, there are comparisons of Hurricane Harvey’s impact to that of Sandy’s, or to Katrina’s from twelve years ago. The reality is that the storm’s toll probably won’t be known for years. And the toughest losses, the emotional ones, don’t come with a price tag.

What we do know is that survivors of Harvey have a very long road ahead of them.

We saw that compassion here, in the days and months after Sandy. Yes, there always will be those that will take advantage of the vulnerable, but these selfless gestures give us hope and restore our faith in mankind… at a time when we sorely need it.

So, yes, AT WAVE’S END is about a hurricane. A hurricane that feels a lot like Sandy did. It HAS to, because I started writing this book during the storm. Thanks to a friend of mine, I had this idea about a woman who wins a bed and breakfast in an essay contest. And as this book gelled in my head, it felt like Connie Sterling WOULD be the ideal innkeeper for the rag-tag Mermaid’s Purse at the Jersey shore… with a little help from her daughter Faith, as usual.

More than the hurricane’s devastation, I wanted AT WAVE’S END to capture the resilience of a community in the wake of tragedy—with a little suspense, mother-daughter drama, romance and loads of delicious food thrown in for good measure.

Connect with Patricia Perry Donovan at her website :patriciaperrydonovan.com and on her FB Page  https://facebook.com/PatriciaPerryDonovanBooks/