By lindasbookobsession in Uncategorized on October 2, 2017
4 comments 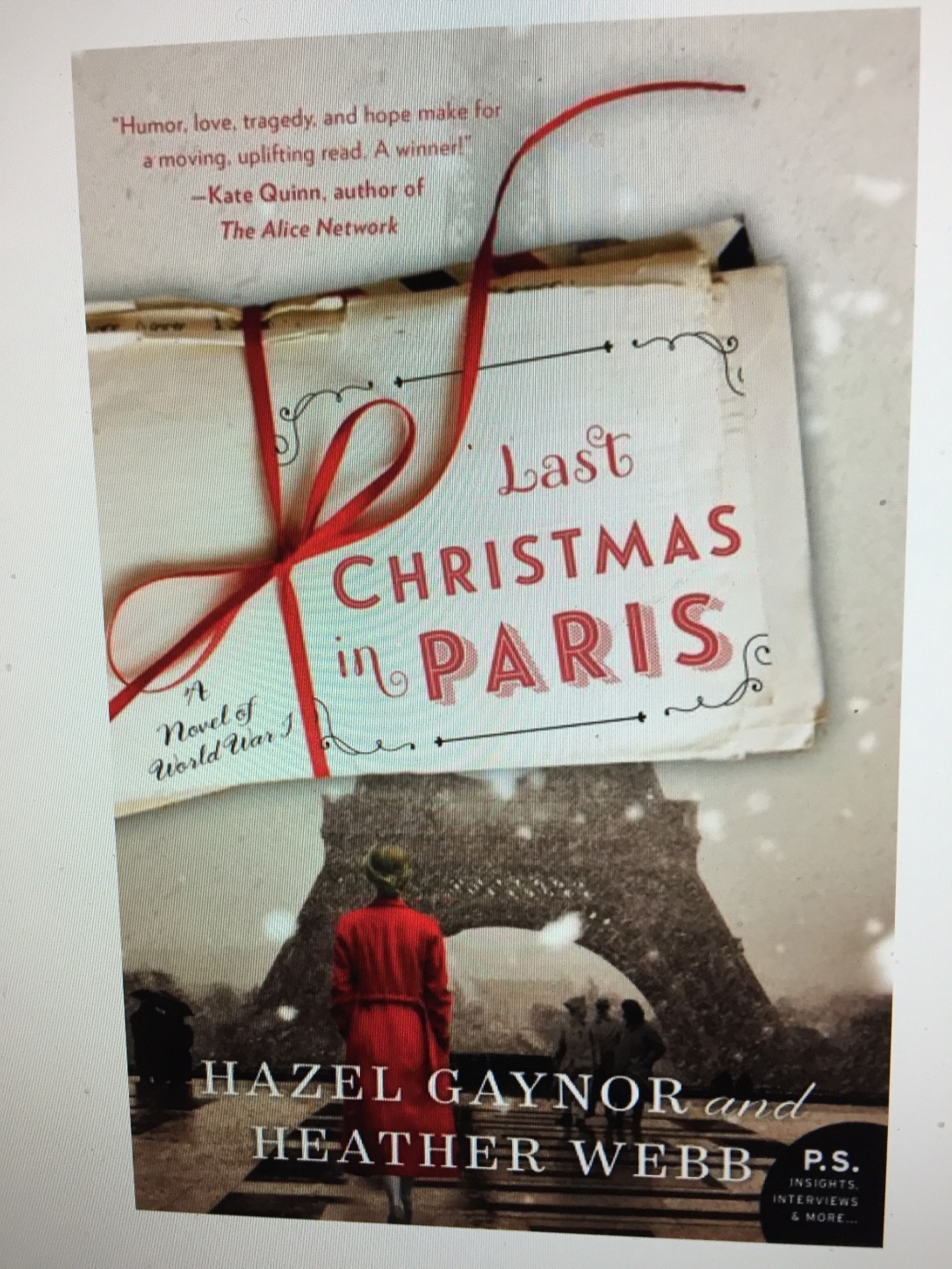 Hazel Gaynor and Heather Webb, whose World War I romance Last Christmas in Paris arrives tomorrow, join us to sketch an image of what Christmas was like back then.

Hazel and Heather: At the start of WW1, it was famously declared that it would all be over by Christmas. Of course it would — no one would fight through a holy day and jolly holiday, right?

Full of patriotism and naive enthusiasm for the grand adventure ahead, thousands of ordinary men enlisted as soldiers in the British Army, and became part of a war that would last four years, claim the lives of millions and become known as the worst war in modern history. But what was Christmas like during those wartime years, and how did people mark the occasion, overseas and at home?

For many, Christmas was no different to any other time of year. Fighting continued, rationing worsened, and the event passed without much fuss or recognition. But for many — arguably the majority — even in the difficult years of wartime, Christmas remained a time for reflection, for positivity, for hope and, above all, a time of peace and goodwill to all men. Even when “all men” includes the enemy.

The royal family also recognized the importance of boosting morale during the festive period. Princess Mary famously sent a Gift Fund Christmas Box to every soldier serving overseas or at sea in 1914, with eligibility eventually extending to all those serving, whether overseas or at home, and even to next of kin of 1914’s casualties. The gift was an embossed brass tin, containing a variety of items including tobacco, chocolate, writing materials, a Christmas card and a photograph of the princess. The soldiers treasured this small token of love and sympathy from home, with many of the original tins still surviving and on display in museums today.

Of all the time the soldiers were away, it was perhaps Christmas when emotions ran highest and when loved ones and home comforts were most missed. Year round, soldiers relied heavily on a few lines from home to know they were being thought of, and to keep their spirits up during long, monotonous hours in the trenches waiting for their turn to be rotated to the front. A few sheets of writing paper, OXO cubes to improve the taste of their tea, tobacco, cigarettes, a photograph of children could help tremendously, and never more so than at Christmas. During Christmas 1917 alone, 550,000 mail sacks of parcels and gifts from home were sent to France from Britain.

But perhaps the most famous Christmas story to emerge from the war was the Christmas Truce of 1914. While movie-makers and novelists might be guilty of embellishing the remarkable account of unofficial ceasefires between British and German soldiers along the Western Front around Christmastime, it remains a significant and powerful event, testament to the sentimental pull of the Christmas spirit. Stories emerged in letters home and in diary entries of allied and enemy troops playing football in No Man’s Land, exchanging gifts and singing Christmas carols. It is hard to imagine anything more poignant than a rendition of Silent Night emerging from the frost-hardened trenches. Historians cannot definitively agree on the precise details of an event that has almost become the stuff of myth and legend, but it is generally believed that 100,000 soldiers participated in various spontaneous acts of Christmas spirit along the Western Front. At a time of such misery and despair, it is hard not to be touched by the legacy of this particular Christmas story.

During the war, the British government always considered morale to be a priority, but especially during the festive season. With supplies of food essentials falling low — eggs, butter, sugar — even the traditional Christmas cake was under threat. But wartime resilience saw ways around the difficulties, and Christmas — although missing the usual excesses — was vigorously celebrated, just as it had been in peacetime. In the military hospitals, the staff decorated the wards and made every attempt to bring a little Christmas cheer to the soldiers’ bedsides.

Christmas, as much as it could, also remained a time for entertainment and much-needed distraction. Concert parties were popular for men serving overseas, while at home the theaters continued to roll out the traditional pantomime. Rousing patriotic songs such asIt’s a Long Way to Tipperary and Ivor Novello’s Keep the Home Fires Burning kept spirits up. Newspapers continued to print their Christmas specials, presenting cheerful, hopeful images of war. The propaganda machine was well and truly oiled, especially when it came to the festive period. Images of soldiers returning home for leave fueled sentimentality, national pride and the continued recruitment drive for more men to enlist.

Christmas during wartime was a very different experience from the peacetime Christmases the public had known. If anything, it provided an opportunity for a nation to unite and to defiantly carry on, shining a light of hope for peace, even among the devastation and hardships of war.

About Last Christmas in Paris:

August 1914. England is at war. As Evie Elliott watches her brother, Will, and his best friend, Thomas Harding, depart for the front, she believes—as everyone does—that it will be over by Christmas, when the trio plan to celebrate the holiday among the romantic cafes of Paris.

But as history tells us, it all happened so differently…

Evie and Thomas experience a very different war. Frustrated by life as a privileged young lady, Evie longs to play a greater part in the conflict—but how?—and as Thomas struggles with the unimaginable realities of war he also faces personal battles back home where War Office regulations on press reporting cause trouble at his father’s newspaper business. Through their letters, Evie and Thomas share their greatest hopes and fears—and grow ever fonder from afar. Can love flourish amid the horror of the First World War, or will fate intervene?

Christmas 1968. With failing health, Thomas returns to Paris—a cherished packet of letters in hand—determined to lay to rest the ghosts of his past. But one final letter is waiting for him…

Hazel Gaynor is the New York Times bestselling author of The Girl Who Came Home and The Cottingley Secret and recipient of the 2015 RNA Historical Novel of the Year award. Hazel lives in Ireland with her husband and children.

Heather Webb is the acclaimed author of historical novels Becoming Josephine and Rodin’s Lover, selected by Goodreads as a Top Pick in 2015. Heather lives in New England with her children and husband.