In this re-imagining of Phantom of the Opera, meet a Christine Daaé you’ve never seen before… Christine Daaé sings with her violinist Papa in salons all over Paris, but she longs to practice her favorite pastime—illusions. When her beloved Papa dies during a conjurer’s show, she abandons her magic and surrenders to grief and guilt. Life as a female illusionist seems too dangerous, and she must honor her father’s memory.
Concerned for her welfare, family friend Professor Delacroix secures an audition for her at the Nouvel Opéra—the most illustrious stage in Europe. Yet Christine soon discovers the darker side of Paris opera. Rumors of murder float through the halls, and she is quickly trapped between a scheming diva and a mysterious phantom. The Angel of Music.
But is the Angel truly a spirit, or a man obsessed, stalking Christine for mysterious reasons tangled in her past?
As Christine’s fears mount, she returns to her magical arts with the encouragement of her childhood friend, Raoul. Newfound hope and romance abounds…until one fateful night at the masquerade ball. Those she cares for—Delacroix, the Angel, and even Raoul—aren’t as they seem. Now she must decide whom she trusts and which is her rightful path: singer or illusionist.
To succeed, she will risk her life in the grandest illusion of all. 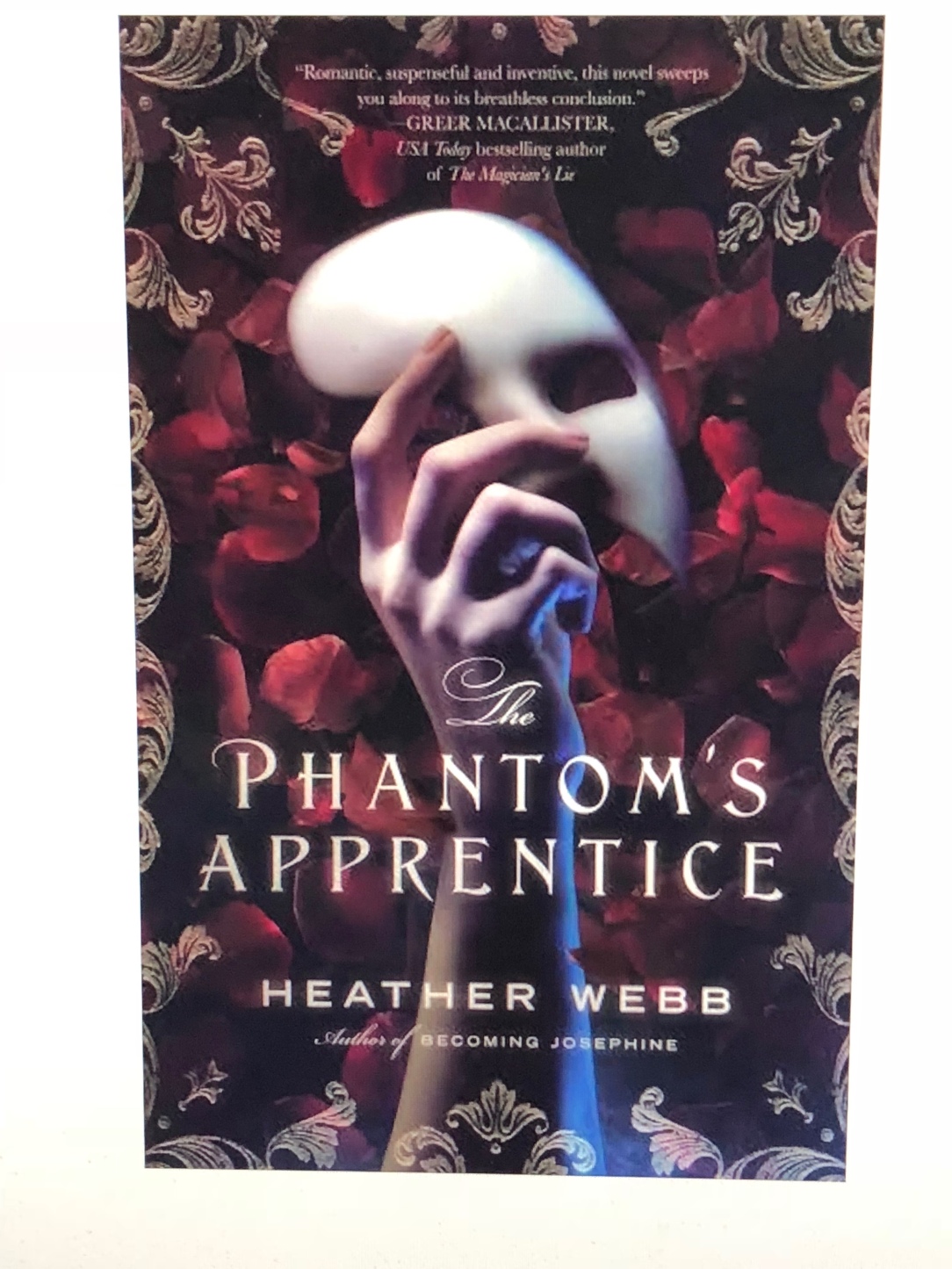 My Review of “The Phantom’s Apprentice” by Heather Webb

Bravo to Heather Webb, Author of “The Phantoms’s Apprentice” for weaving such a fantastic story combining, music, magic and mystery. The Genres for this Novel are Fiction, Mystery, Suspense, Thriller, with an essence of magicical realism thrown in.

This is sort of a re-telling of The Phantom of the Opera, with many of the similar characters, but there are differences. In this story, the reader gets to sit in the front row, and view the Paris Opera theater and its colorful cast of characters play the intense and intriguing drama concluding in a suspenseful climax.

Heather Webb describes the characters as complex and complicated. There are secrets, danger, betrayals, jealousy, threats and murder. Are any of the character really who they say they are?

A friend of the family, Professor Delacroix gets Christine an audition at the Opera de Paris. Christine get to work at the Opera. The lead singer acts in a threatening manner towards Christine.

There are rumors of darkness and a Ghost or Phantom at the Opera, making threats and demands. Then there are murders. A few times someone has saved Christine after she was attacked, and when she fell. Who is her savior?

Christine sees a childhood friend, Raoul, who gifts her with a book of Magic, and seeks her company.  “The Angel of Music” demands that Christine not see Raoul.

Christine finds comfort in practicing her Magic Arts. One wonders what is real and what is illusion?

I appreciate that Heather Webb, shows how a determined woman can do what she wants to do, in a man’s world. One also can see the differences of classes in society at this time, the rich and poor, the have and the have nots.

I would highly recommend this novel to those readers who love a mystery, thriller, and romantic story. There are twists and turns, excitement and adventure. I received an Advanced Reading Copy for my honest review.

HEATHER WEBB is the author of historical novels Becoming Josephine and Rodin’s Lover, and the anthology Fall of Poppies, which have been featured in the New York Times, Wall Street Journal, Cosmopolitan, Elle, France Magazine, and more, as well as received national starred reviews.

RODIN’S LOVER was a Goodreads Top Pick in 2015. Up and coming, Last Christmas in Paris, an epistolary love story set during WWI will release October 3, 2017, and The Phantom’s Apprentice, a re-imagining of the Gothic classic Phantom of the Opera from Christine Daae’s point of view releases February 6, 2018.

To date, her novels have sold in ten countries.

Win a paperback copy of The Phantom’s Apprentice by Heather Webb! Two copies up for grabs!

Giveaway is open to US & Canada residents only. Ends on February 26th.

– Giveaway ends at 11:59pm EST on February 26th. You must be 18 or older to enter.
– Giveaway is open to US & Canada residents only.
– Only one entry per household.
– All giveaway entrants agree to be honest and not cheat the systems; any suspect of fraud is decided upon by blog/site owner ahttps://gleam.io/qT0BB/embed?l=http%3A%2F%2Fhfvirtualbooktours.com%2Fthephantomsapprenticeblogtour%2Fnd the sponsor, and entrants may be disqualified at our discretion.
– Winner has 48 hours to claim prize or new winner is chosen.

3 comments on “Lindas Book Obsession Review of “The Phantom of the Opera” by Heather Webb: Historical Fiction Virtual Book Tour”