By lindasbookobsession in Uncategorized on November 15, 2018
No comments 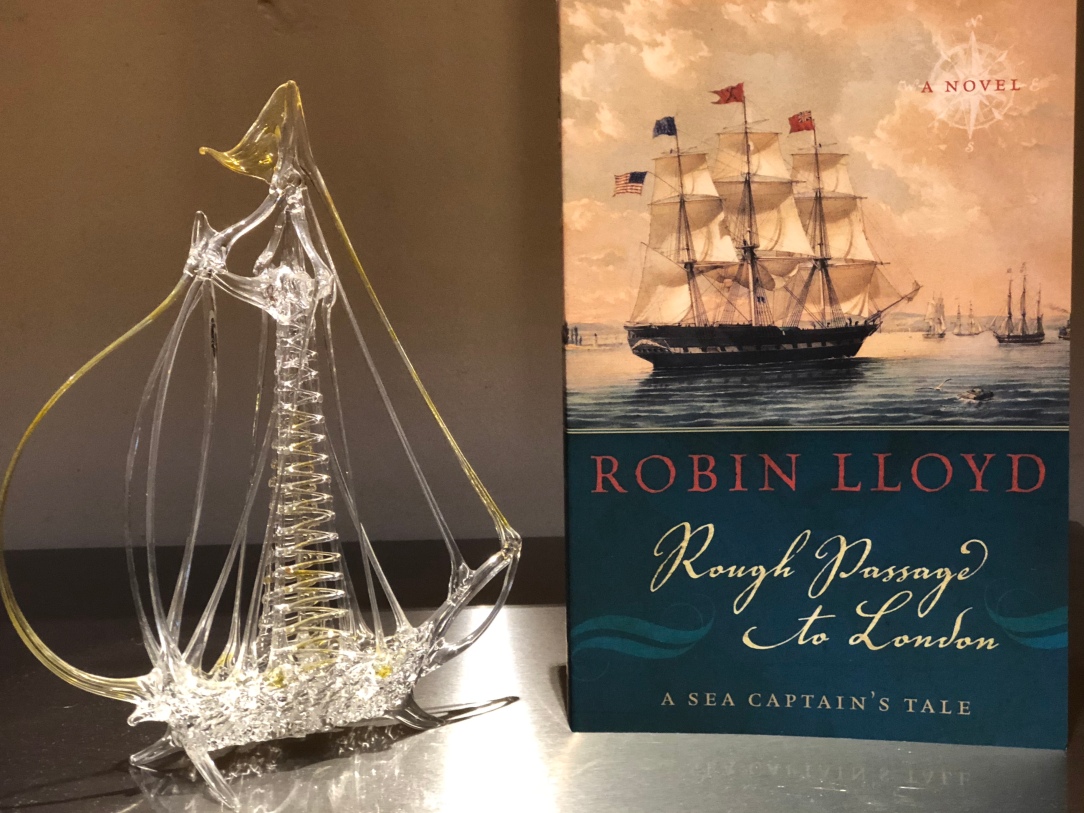 Originally released in 2013, Lloyd’s debut novel will be out for the first time in trade paperback on October 1, 2018 via Lyons Press. 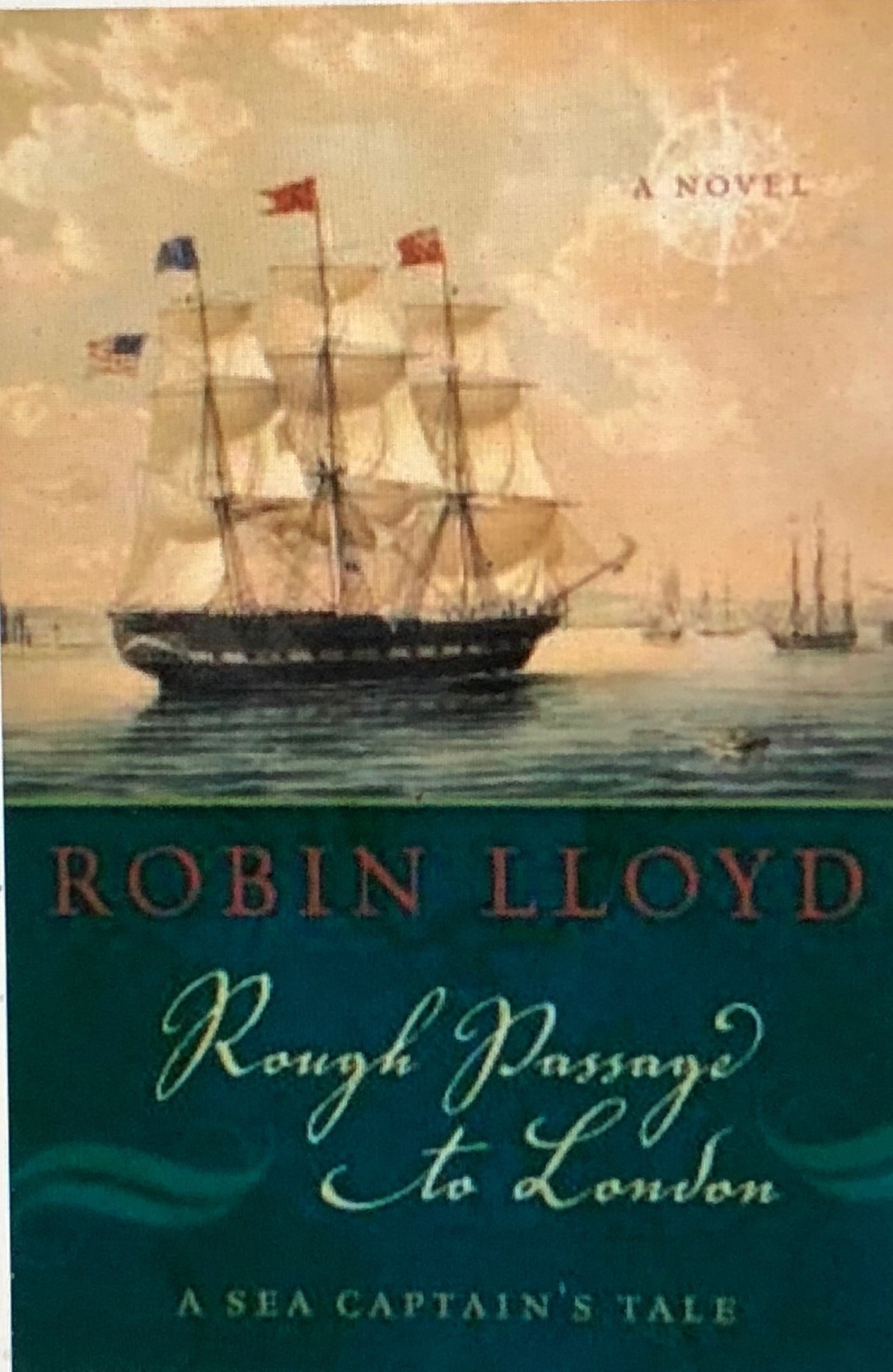 ROUGH PASSAGE TO LONDON opens in Lyme, Connecticut, in the early nineteenth century. Elisha Ely Morgan is a young farm boy who has witnessed firsthand the terror of the War of 1812. Troubled by a tumultuous home life ruled by the fists of their tempestuous father, Ely’s two older brothers have both left their pastoral boyhoods to seek manhood through sailing. One afternoon, the Morgan family receives a letter with the news that one brother is lost at sea; the other is believed to be dead. Scrimping as much savings as a farm boy can muster, Ely spends nearly every penny he has to become a sailor on a square-rigged ship, on a route from New York to London—a route he hopes will lead to his vanished brother, Abraham.

Learning the brutal trade of a sailor, Ely takes quickly to sea-life, but his focus lies with finding Abraham. Following a series of cryptic clues regarding his brother’s fate, Ely becomes entrenched in a mystery deeper than he can imagine. As he feels himself drawing closer to an answer, Ely climbs the ranks to become a captain, experiences romance, faces a mutiny, meets Queen Victoria, and befriends historical legends such as Charles Dickens in his raucous quest.

Lloyd is a direct descendant of the real Captain Ely Morgan, who made more than one hundred voyages across the Atlantic, gaining fame and renown on both sides of the ocean. ROUGH PASSAGE TO LONDON combines Lloyd’s meticulous research and reporting abilities with rich imagination and his close personal connection to the family drama at the core of the story. His search to find out more about his seafaring ancestor began with an oil portrait of Captain Elisha Ely Morgan he inherited from his grandmother. All he knew about this ancestor was that he was a ship captain who was a close friend of Charles Dickens. After two years of research, he had found intriguing anecdotes and scraps of historical information about Morgan, but no journals. He combed family records and found a typewritten copy of an actual letter Ely Morgan’s mother received from a sailor in 1816 when Ely was just ten years old. The letter notified her of a double tragedy- her two eldest sons, William and Abraham, were apparently lost at sea. The details about Abraham’s fate were puzzling and cryptic. The novel evolved from there. The result is a pitch-perfect historical fiction layered over a heart-pounding mystery that will prove irresistible to lovers of sailing, American history, British culture and great suspense.

Robin Lloyd’s early years were spent on the island of St. Croix where his parents owned a dairy farm and milk plant. As a boy, he grew up sailing in the Caribbean. Lloyd was a foreign correspondent for NBC News for many years where he reported mostly from Latin America and Africa. He also covered the White House during the Reagan and Bush administrations. Lloyd has created and produced news programs with foreign networks as well as documentaries and segments for domestic stations, including Maryland Public Television. Among his prestigious awards are four Emmys from the National Capital Chesapeake Bay region and an Overseas Press Award. He is the author of two novels—Rough Passage to London and the recently released Harbor of Spies. He divides his time between Camden, Maine and Chevy Chase, Maryland.

Robin Lloyd is a great reporter, and he has shaped meticulous research into a rollicking story of the sea and the tall ships that sailed the North Atlantic in the 1800s. Amazingly, he hadn’t planned to write a novel when he began reading about his ancestor, Elisha Ely Morgan—who knew everyone of his day, from Charles Dickens to Queen Victoria. We can be glad that the more [Lloyd] read, the more he realized he had the makings of a fine story.”— Bob Schieffer, chief Washington correspondent, CBS News

“This epic seafaring tale comes highly recommended for its exciting narrative and historical acumen. Lloyd’s research and personal connection to the past bring this tale to life, and fans of Patrick O’Brian will want to add this work to their reading list.”— Library Journal

Robin Lloyd has written a “Sea Tale” that is intense, intriguing, captivating, and full of suspense, mystery and adventure. The Genres for this story are a combination of Historical Fiction and Fiction, that are woven through both the author’s research and imagination. The author bases the main character Captain Morgan, actually Elisha Ely Morgan a relative in his family.

Elisha is a young boy and is with his brother around the War of 1812. While the two boys are investigating their property, they witness the British blow up American ships. They escape. Elisha’s father is a mean tempered man who bullies and beats him. Elisha leaves home after a letter arrives that two of his brothers who left  home have met with tragedy. One brother is dead, and the other is either missing or dead. Elisha makes his mind up to find his missing brother. This mystery, adventure and chase takes much of his life.

Elisha sails off  the rough seas and finds himself working hard as a sailor. He works hard, and gets a higher rank. He finds himself on large sailing ships going between America and England. As the years pass, the reader sees the dangerous path that Elisha has taken. There are hurricanes, and storms at sea, mutiny, war, pirates, drugs and slave trade.

I would recommend this book for those readers that enjoy the chase, adventure, mystery and danger.