MY REVIEW OF “RAINY DAY WOMEN” by KAY KENDALL 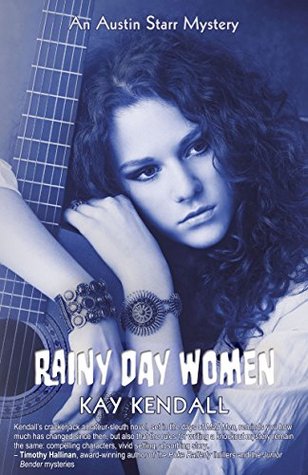 Kay Kendall’s RAINY DAY WOMEN is the second book in the Austin Starr Mystery series. In 1969, during the week of the Manson murders and Woodstock, the intrepid amateur sleuth, infant in tow, flies across the continent to support a friend suspected of murdering women’s liberation activists in Seattle and Vancouver. Then her former CIA trainer warns that an old enemy has contracted a hit on her. Her anxious husband demands that she give up her quest and fly back to him. How much should Austin risk when tracking the killer puts her and her baby’s life in danger?

“Kay Kendall’s second Austin Starr mystery will have you believing it’s 1969 all over again. In a book where the musical references mean you’ll find yourself humming tunes now known as “classic vinyl”, Kendall peppers her work with references to the times which make the decades disappear – and she respects her readers enough to not overdo it. Her sense of place as she allows the mystery to unfold within Vancouver’s University of British Columbia, beset by the rain for which the “wet” coast is known, is pitch perfect. Hot diggity – a thoroughly enjoyable read. Now I’m off to dig out my Bob Dylan albums and find an old bra I can burn.”
– Cathy Ace, Author of The Cait Morgan Mysteries, and the WISE Enquiries Agency Mysteries

“Feminism, the ’60s, murder, and a friend in big trouble. Austin Starr is back to help, leaving her husband behind but bringing her baby along. Rainy Day Women is an entertaining and fast-paced mystery set in a turbulent time. Right on!”
– Bill Crider, Anthony Award-winning author of The Sheriff Dan Rhodes Mystery Series

“An exciting jaunt back to the days of flower power and Women’s Lib, Kay Kendall’s RAINY DAY WOMEN explores serious issues that still resonate today, nearly fifty years later. Austin Starr’s second mystery (after 2013’s DESOLATION ROW) packs danger and lots of heart, and hits all the right notes in depicting the late sixties. Austin is a smart, relentless sleuth with a baby on her hip and a Makarov pistol in her macramé purse. Right on, sister!”
– James W. Ziskin, author of the Ellie Stone Mysteries, STYX & STONE, NO STONE UNTURNED, and STONE COLD DEAD(less)

____________________________________________________________________________________________
MY REVIEW OF  “RAINY DAY WOMEN’  by KAY KENDALL
KUDOS to Kay Kendall , author of “Rainy Day Women” for amazing, memorable descriptions of the late sixties. I can hear the music, Bob Dylan, and Peter, Paul and Mary.  The sixties were the time of the Vietnam protests and draft dodgers, hippies,  Woodstock, feeling free, and woman’s liberation. The author depicts the sense of the sixties perfectly. The genres of this book are Mystery and Fiction.
The author describes the characters as complicated and complex. This was a time of wanting to be independent, involved with significant causes, and the importance of feeling free.  The main character,  Austin Starr is combining the roles of wife, young mother to a three-month old and student. Austin has some CIA training and in the first book Austin helped solve a crime. I love the way the author starts the story,”I STOOD, CAREFUL not to make any noise, afraid to waken the sleeping ogre.”…..”What did it matter if my escape  took ten minutes? Breaking free was what counted.”  Now I was on edge, wanting to know what was going on.  The author has a gift of telling her story and describing her characters.
Austin gets a call  from a close friend,  who is a suspect in a murder. Austin reminds me of a grown Nancy Drew, and has the need to help her friend. Austin and her husband live in Canada. Although her husband is not officially a draft dodger, his beliefs are against fighting  and war. He is  a graduate student at the University in Canada. Austin convinces her husband David to let her go and provide support for her friend, but she has to take her three-month old baby with her.  David warns her to stay out of trouble and leave the investigating to the proper officials. Austin will be staying with her friend’s family.
Austin’s friend is a member of a group of women who are supportive of women’s liberation The murdered victim was a member as well. Austin’s friend works in a chemistry laboratory, and there is tremendous tension and competition at work. There are a number of characters who could be suspect for the murder.
I appreciate that the author brings up relevant  topics of the times: women’s liberation and equality,  and  feelings about fighting and war. Other topics that were discussed were incest, and homosexuality. The tension and hostility of the times, and the way the characters responded to it is part of historical significance.
I really enjoyed, the mystery, the intrigue, and the adventure and would highly recommend this entertaining and captivating novel. I received a copy for my honest review.