My Review of “Daughters of the Night Sky” by Aimie K. Runyan

By lindasbookobsession in Uncategorized on November 10, 2017
No comments 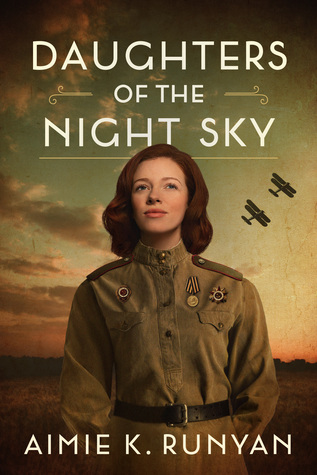 Daughters of the Night Sky

by Aimie K. Runyan (Goodreads Author)
4.81  ·  Rating details ·  21 Ratings  ·  21 Reviews
A novel—inspired by the most celebrated regiment in the Red Army—about a woman’s sacrifice, courage, and love in a time of war.

Russia, 1941. Katya Ivanova is a young pilot in a far-flung military academy in the Ural Mountains. From childhood, she’s dreamed of taking to the skies to escape her bleak mountain life. With the Nazis on the march across Europe, she is called on to use her wings to serve her country in its darkest hour. Not even the entreaties of her new husband—a sensitive artist who fears for her safety—can dissuade her from doing her part as a proud daughter of Russia.

After years of arduous training, Katya is assigned to the 588th Night Bomber Regiment—one of the only Soviet air units comprised entirely of women. The Germans quickly learn to fear nocturnal raids by the daring fliers they call “Night Witches.” But the brutal campaign will exact a bitter toll on Katya and her sisters-in-arms. When the smoke of war clears, nothing will ever be the same—and one of Russia’s most decorated military heroines will face the most agonizing choice of all.

MY REVIEW OF ‘DAUGHTERS OF THE NIGHT SKY’ by Aimie K. Runyan

Kudos to Aimie K. Runyan, author of “Daughters of the Night Sky”  (Lake Union Publishing, Publication date January, 2018) for writing such an enticing and intriguing novel combining Historical Fiction and Fiction, which are the genres for this story. The story takes places during World War Two, mostly in Russia.

I can appreciate Aimie K. Runyan’s hours of historical research for this novel. The author writes  about the daring women in the Night Bomber Regiment of Russian fliers, known as the “Night Witches”. The “Night Witches” were known to do major damage to the German companies in the area.

The characters of the story are described as brave and courageous, in these complex and complicated times. Katya Ivanova has always dreamed of being a pilot, flying in the skies. It is a tough battle, because women were often discriminated  in the education they got, and the jobs that they could do. Katya  works extremely hard in her studies to be able to accomplish her dreams. She is encouraged and supported by another Pilot, who becomes her husband. Can there be time for War and Love?

As the war with the Germans intensifies, Katya is called upon to fly the combat planes for Mother Russia. Her husband has gone to the front to fight there, and really wants Katya to think about this. Katya is determined that she will fight for Mother Russia the best way that she can, in the air. Katya meets other women, and they work together on the ground and sky to fight for their Mother Russia. The women are proving they can be a force to be reckoned with. At time, there are doing better than their male counterparts.

Nothing is fair in love and war. War can be devastating, and there are casualties and dangers. I love that the author has written about a courageous and brave group of women who were able to not only live their dreams, but fight bravely together for their country. They had to fight discrimination in everything from education, to the supplies they were given for combat. Men were given better supplies to fight with during the war. The women did not have radios in the planes that they were used to flying, making their jobs more dangerous and complicated. The women had to sew the uniforms they were given so they would fit.