​where the ladies of the Dahlias, the local garden club, are happy to dig a little dirt!

In the seventh book of this popular series, it looks like the music has ended for Darling’s favorite barbershop quartet, the Lucky Four Clovers—just days before the Dixie Regional Barbershop Competition. Another unlucky break: a serious foul-up in Darling’s telephone system—and not a penny for repairs. And while liquor is legal again, moonshine isn’t. Sheriff Buddy Norris needs a little luck when he goes into Briar Swamp to confront Cypress County’s most notorious bootlegger. What he finds upends his sense of justice.

Once again, Susan Wittig Albert has told a charming story filled with richly human characters who face the Great Depression with courage and grace. She reminds us that friends offer the best of themselves to each other, community is what holds us together, and luck is what you make it.

“Captivating . . . Charming characters, a fast-paced plot, and a strong sense of history help make this a superior cozy.” —Publishers Weekly

“The author of the popular China Bayles mysteries brings a small Southern town to life and vividly captures an era and culture—the Depression, segregation, class differences, the role of women in the South—with authentic period details. Her book fairly sizzles with the strength of the women of Darling.” —Library Journal Starred Review

Praise for the Darling Dahlias series: ”The author of the popular China Bayles mysteries brings a small Southern town to life and vividly captures an era and culture—the Depression, segregation, class differences, the role of women in the South—with authentic period details. Her book fairly sizzles with the strength of the women of Darling.” —Library Journal Starred Review

“Captivating . . . Charming characters, a fast-paced plot, and a strong sense of history help make this a superior cozy.” —Publishers Weekly

Susan has been a fulltime novelist since she left her career as a university English professor and administrator in 1985. A New York Timesbestselling author, her books include biographical fiction (A Wilder Rose) and mystery and historical fiction: the bestselling China Bayles mysteries; The Darling Dahlias; the Cottage Tales of Beatrix Potter; and the Robin Paige Victorian/Edwardian mysteries written with her husband, Bill Albert. Working together, the Alberts have also written over 60 young adult novels.

Susan’s earlier nonfiction work includes Work of Her Own, a study of women who left their careers, and Writing From Life: Telling Your Soul’s Story, a guidebook for women memoirists. That book led to the founding of the Story Circle Network in 1997. She has edited two anthologies for the Story Circle Network: With Courage and Common Sense (2004) and What Wildness Is This: Women Write about the Southwest(2007).

Susan’s most recent nonfiction work includes two memoirs: An Extraordinary Year of Ordinary Days and Together, Alone: A Memoir of Marriage and Place. She serves as a co-editor of StoryCircleBookReviews.

Susan says that she “grew up rural” and is proud to claim farming in her family heritage. She continues to live the rural life with Bill in the Texas Hill Country, where she writes, gardens, and raises a varying assortment of barnyard creatures. She has three children, eight grandchildren, and three great-grandchildren. 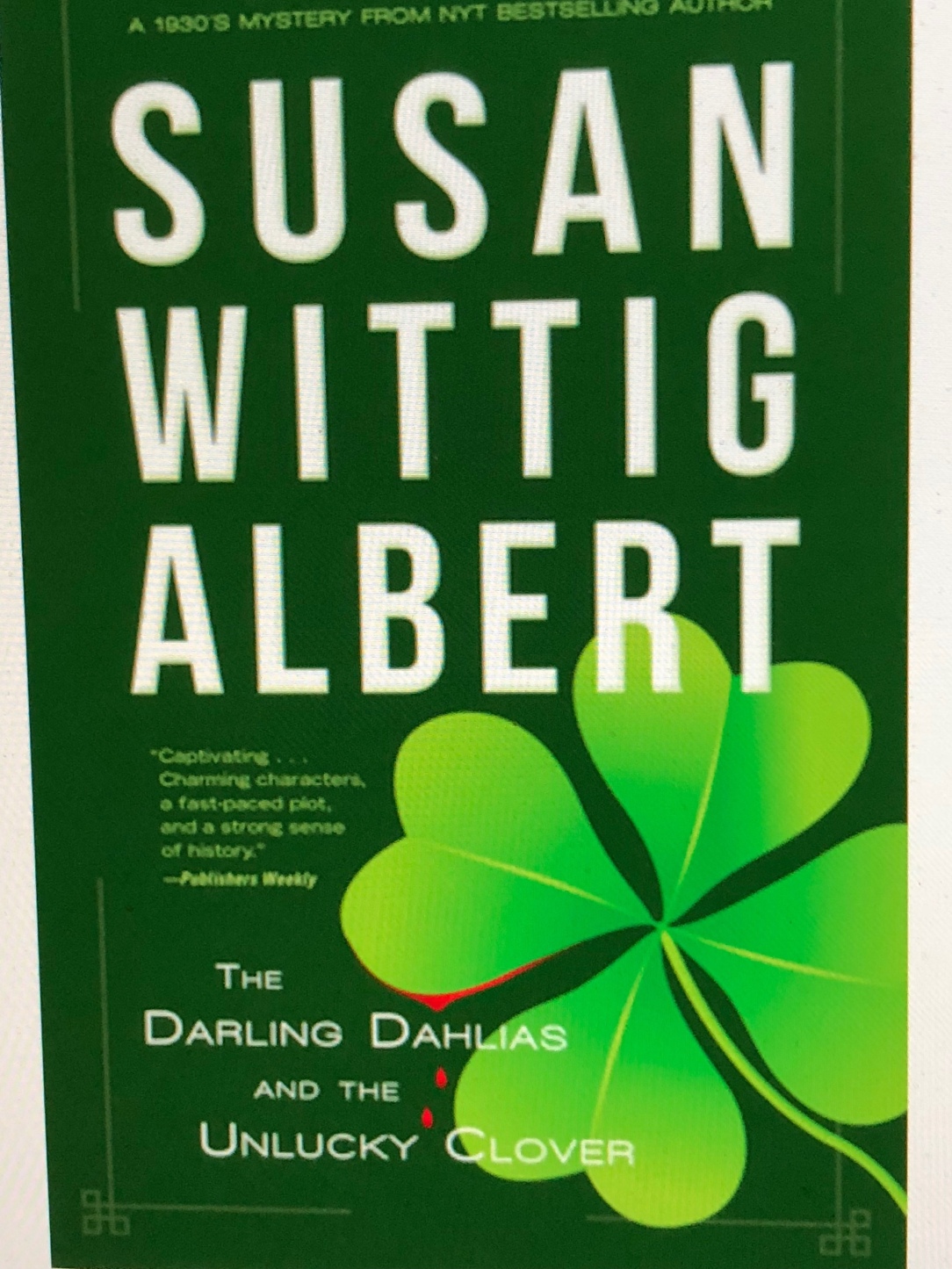 I appreciate the intriguing way that Susan Wittig Albert, Author of “The Darling Dahlias and the Unlucky Clover”, weaves her charming, delightful and mysterious story and colorful characters together.

The timeline of this story is around the depression in Darling, Alabama. The genres for this story are mystery, cozy mystery, fiction with some historical fiction.

The author describes her characters as quirky, likeable, neighborly, nosy, and flawed. This is the seventh book in the series, and the first book that I am reading and reviewing. It can be read as a stand- alone, and I would be interested in reading the others.

Alcohol is now legal, but bootlegging still exists, and is a big business by the swamps, and prison. It is fascinating to hear reference to Party phones, the automobiles of the time, and the way people had different complications. Although times were less complex, there still were hardships. There were financial hardships after the Depression. There is talk of a “New Deal” that promises more jobs. There is news of Kidnappings for money. Since money is hard to come by, there is an old broken- down phone system, and some businesses might have to close. One of the limited partners in these businesses doesn’t want to provide the monies necessary to improve and keep these things running.

To top it off, the “Lucky Four Clovers” the town’s winning quartet is having problems of its own. The Women’s “Darling Dahlias”, the local garden club helps boost the morale, by making pies, and being a support system to one another.

In addition, the town is faced with a murder. There are a few characters that could be suspect. In a small town, it is hard to keep secrets and information from getting out.

The women of this town are hardworking, resourceful, enterprising , and creative with the lack of funds. I appreciate that the author discusses the roles of women during the depression, family, friendships, neighbors, and community.

I would recommend this cozy mystery to readers that appreciate mystery, and fiction. I received an Advanced Reading Copy for my honest review.

During the Blog Tour we will be giving away one paperback copy of The Darling Dahlias and the Unlucky Clover to one lucky winner! To enter, please enter via the Gleam form below.

– Giveaway ends at 11:59pm EST on March 16th. You must be 18 or older to enter.
– Giveaway is open to US residents only.
– Only one entry per household.
– All giveaway entrants agree to be honest and not cheat the systems; any suspect of fraud is decided upon by blog/site owner and the sponsor, and entrants may be disqualified at our discretion.
– Winner has 48 hours to claim prize or new winner is chosen.